Pardon the pun, but it was yet another stellar year for the Mary Star Academic Decathlon teams. The competition was held over two consecutive Saturdays with the final Super Quiz and Awards Ceremony taking place on February 4. The Stars garnered 41 individual medals as they proved their academic worth once again. This year MSHS brought two teams to the four-division competition which fields 26 individual teams from various private schools in the area. To clarify Team I competed in Division II while Team II competed in Division II. This year's Super Quiz topic was The Age of Imperialism, the literary work was Heart of Darkness, the math was predominantly geometry, and the science was physics.

For Team II, sophomore (and Decathlon rookie) Rayna Sundberg won a silver, junior Denise Arindaeng won a silver and a bronze, freshman Maria Nguyen won a silver and a bronze, senior Katelyn Tomasello finished strongly with two GOLDS: one in Music and the other in Math. Freshman David Craig won three silvers and two bronzes - a very strong achievement for a ninth grader. Finally, junior Jombert Nombrado won six medals: four silvers, a bronze and GOLD in the ultra-competitive Super Quiz. David Craig also received a silver medal for being the second highest scorer in all of Division III. The team itself won silver in Team Super Quiz and a bronze in Team Overall.

For Team I, senior Benjamin Nguyen won a bronze, senior Finina Cabanban won a silver, and sophomore Brigit Szeibert won a GOLD in Interview. Senior Kathy Fernandez won a silver and a bronze. Junior Cassie Demers won a bronze and a GOLD in Science. Her sister, senior Emily Demers, topped her with a silver, a bronze and GOLDS in Math and Interview. Junior Maria Villoria, the Queen of Silver, won four silvers and a bronze. Finally Christina Szeibert won two silvers, two bronzes, and GOLD in Econ. She also received a silver medal for being the second highest score in all of Division II. The Team itself earned silver in both Team Super Quiz and Team Overall while beating our nemesis Flintridge Sacred Heart (overall) for the first time during my tenure as coach. Mary Star finished fourth overall amid all the teams competing this year.

On the first day back in school, most of the Decathletes wore their medals on campus. Hearing the clanging of their medals about campus made me smile. Nothing validates months of hard work and early mornings more than multiple medals. Congratulations, Stars, you truly earned your medals! 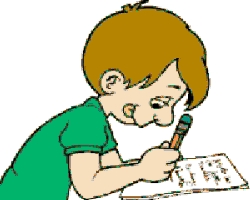 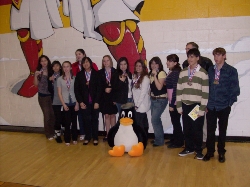