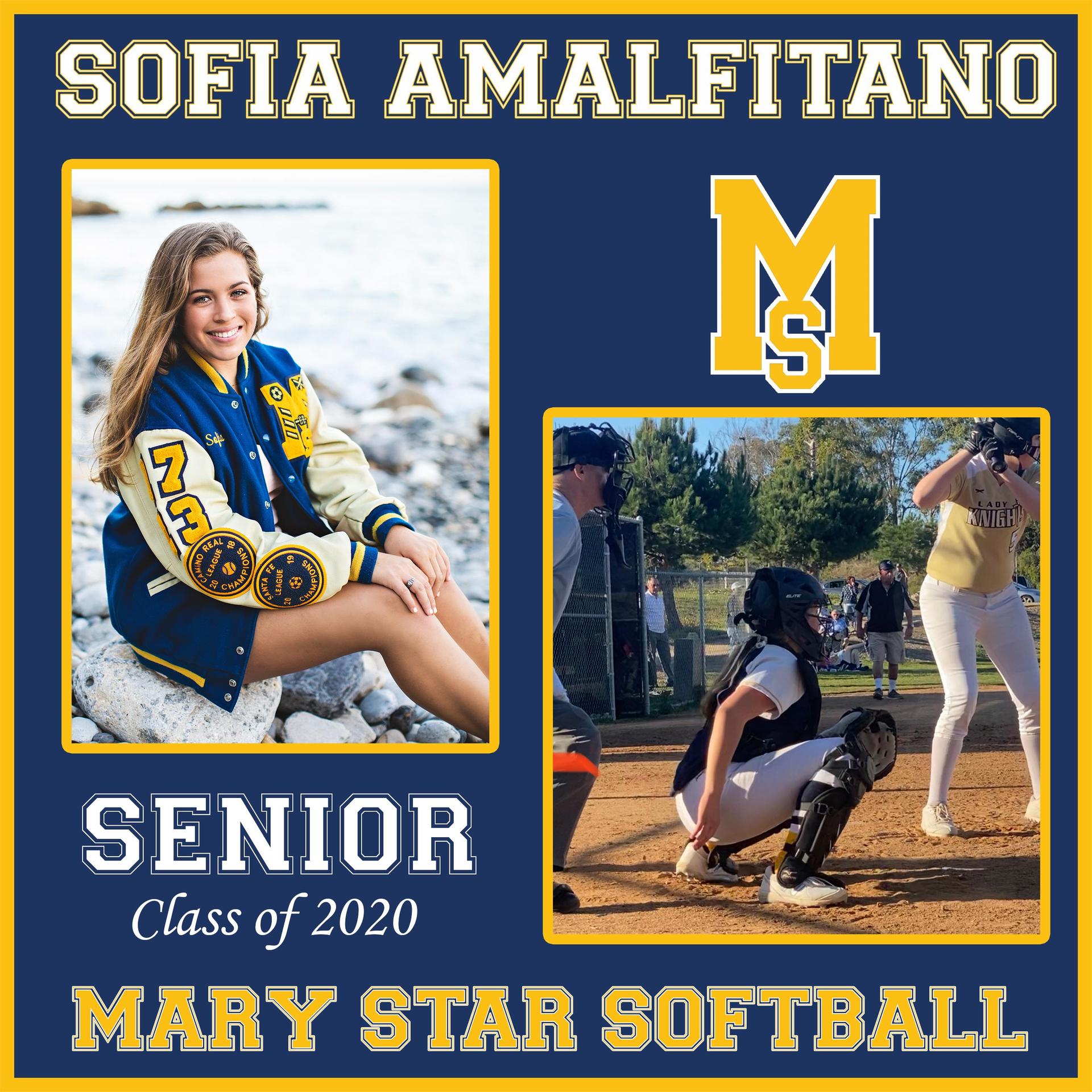 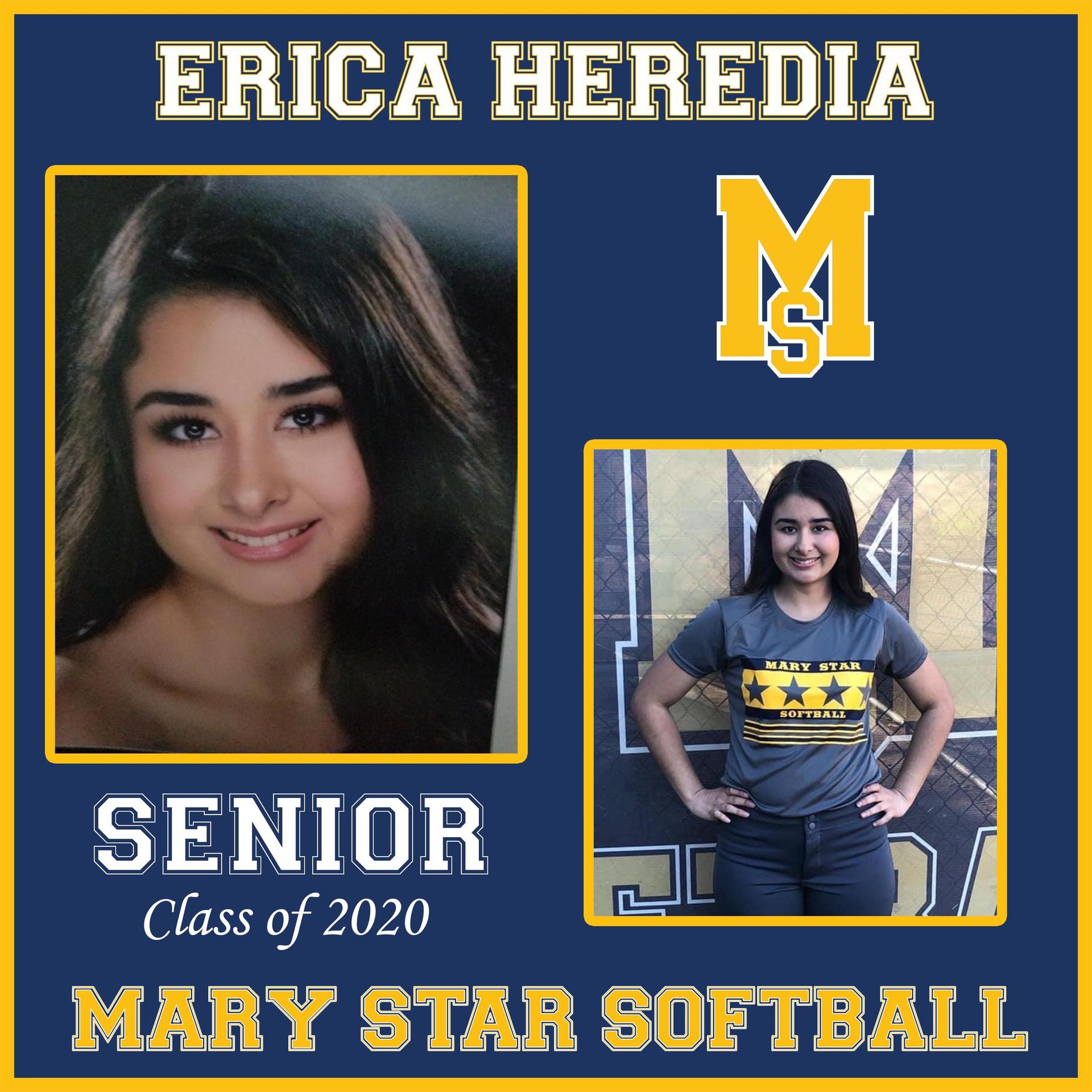 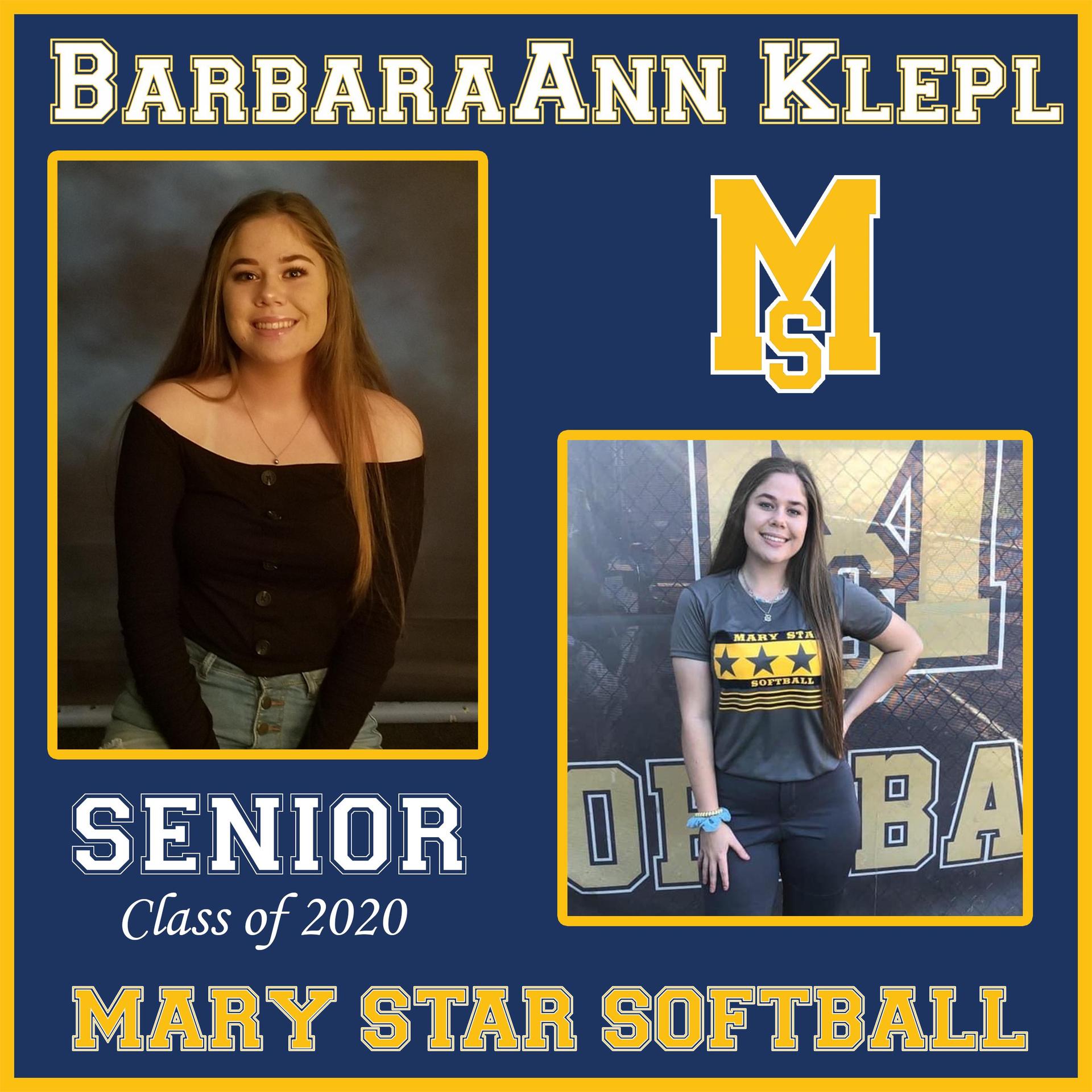 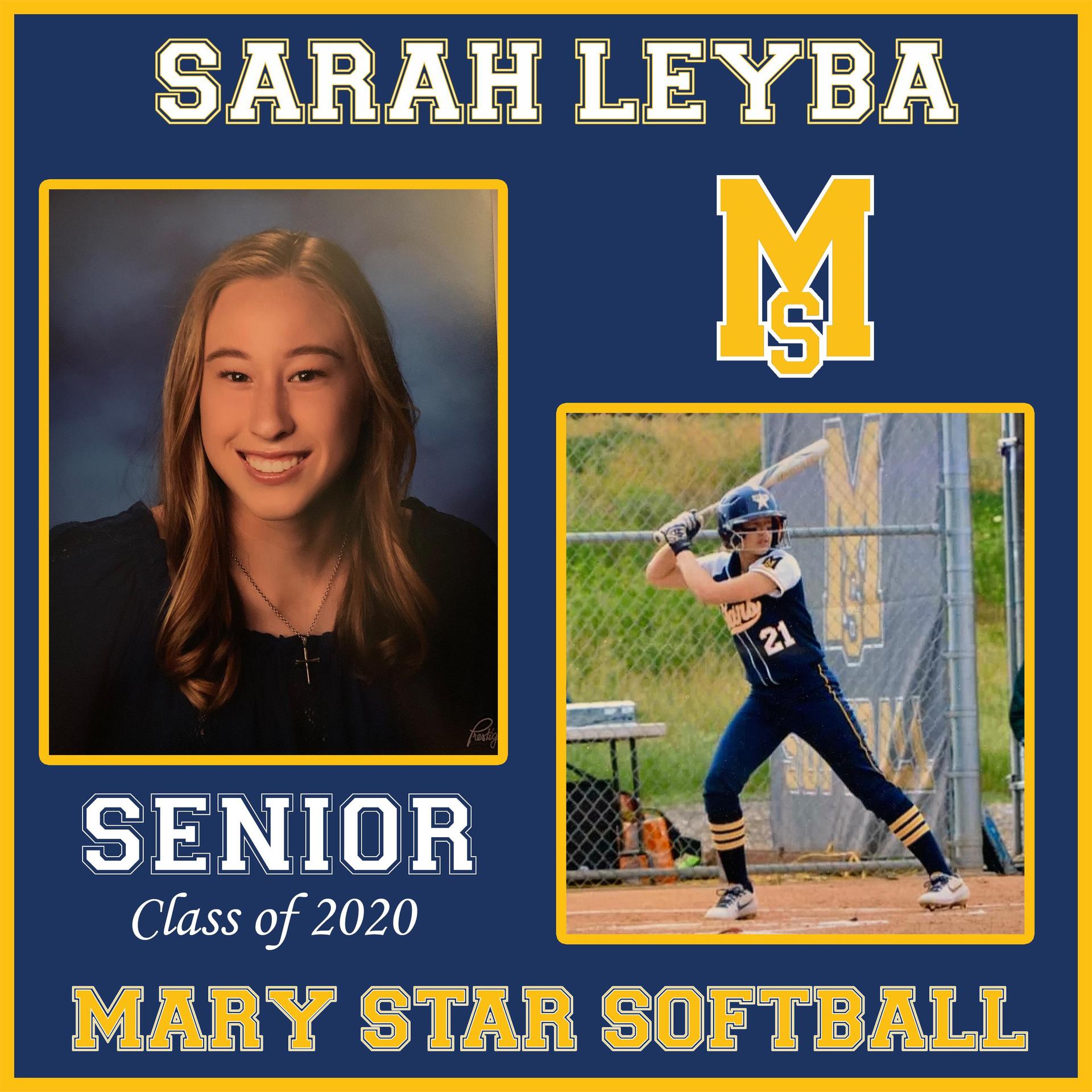 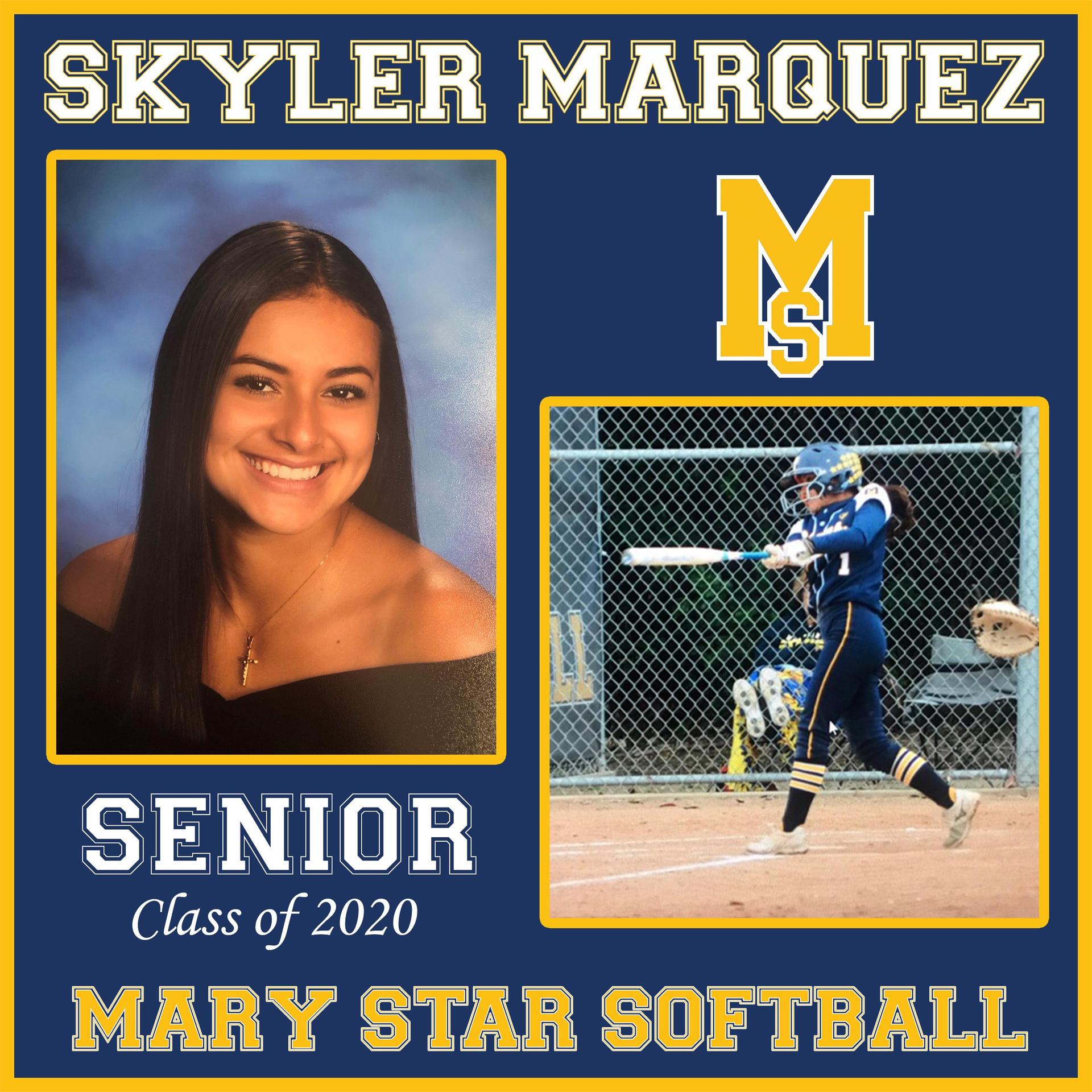 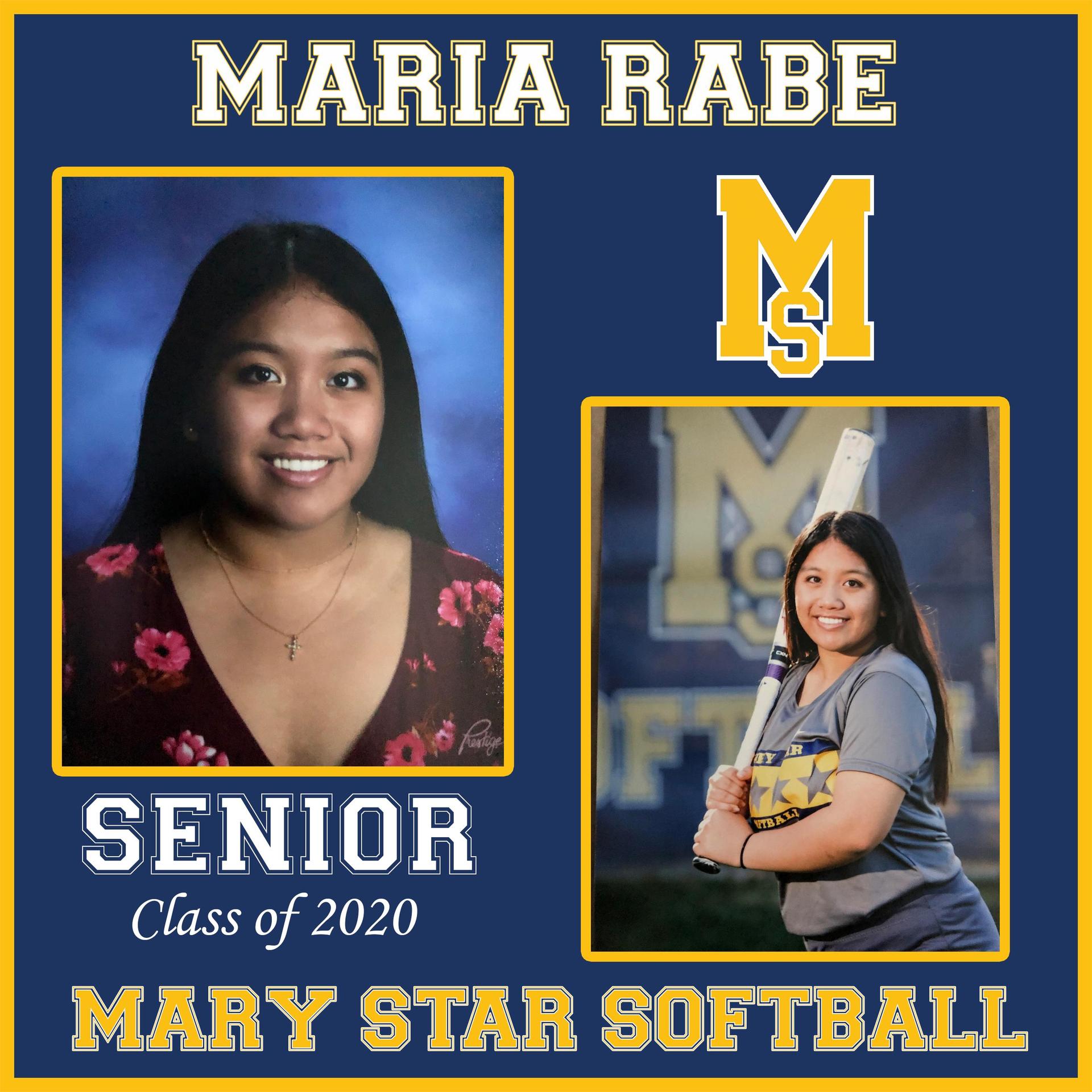 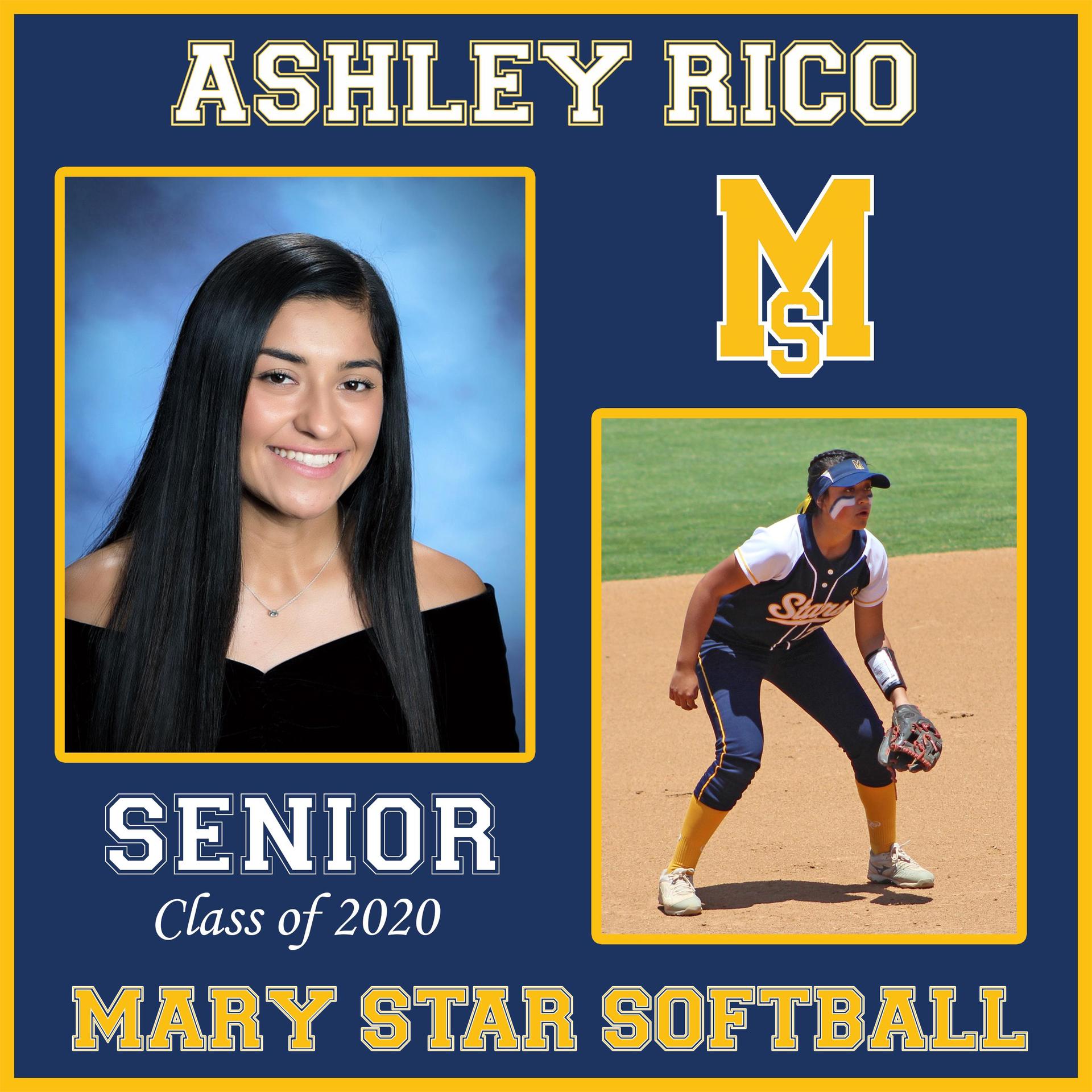 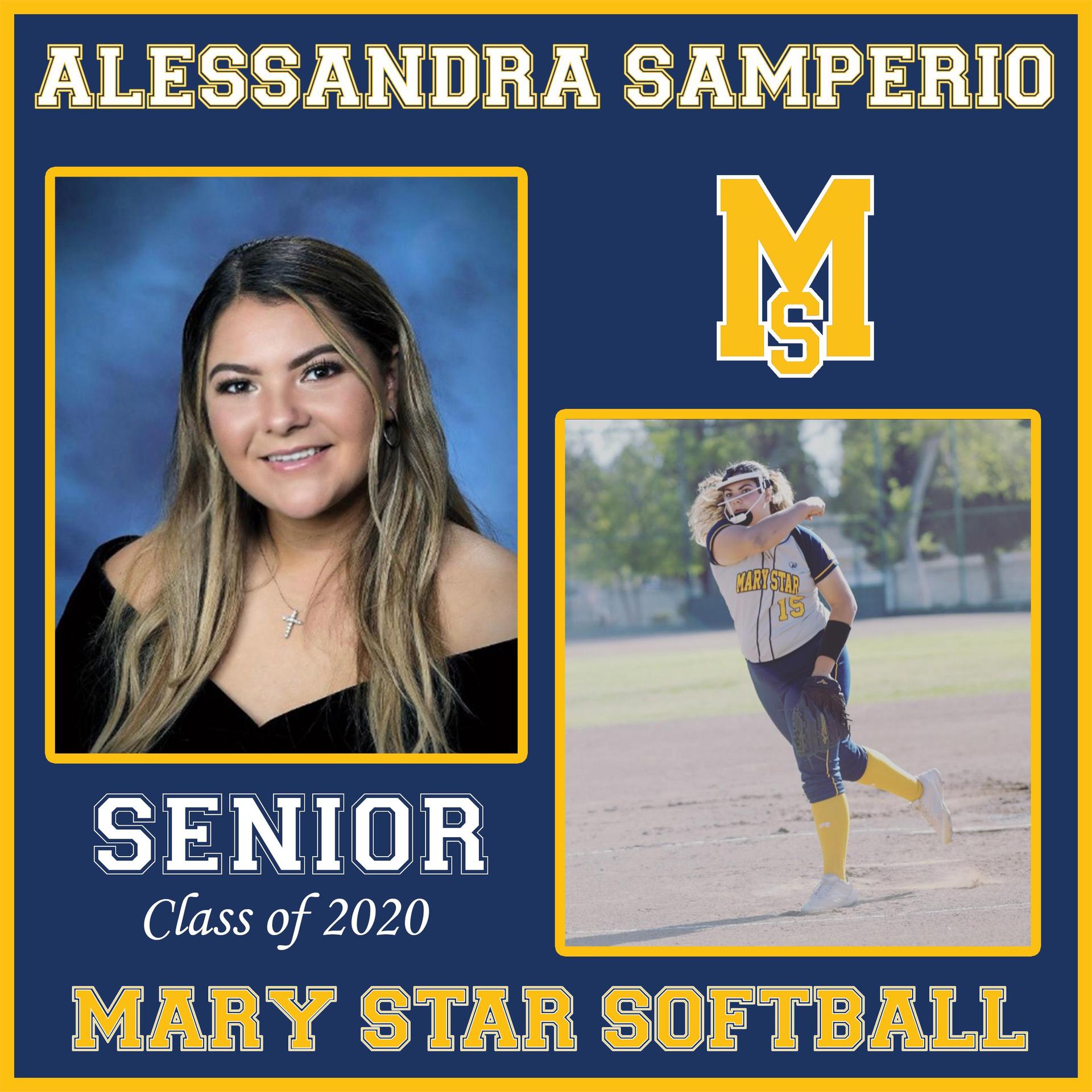 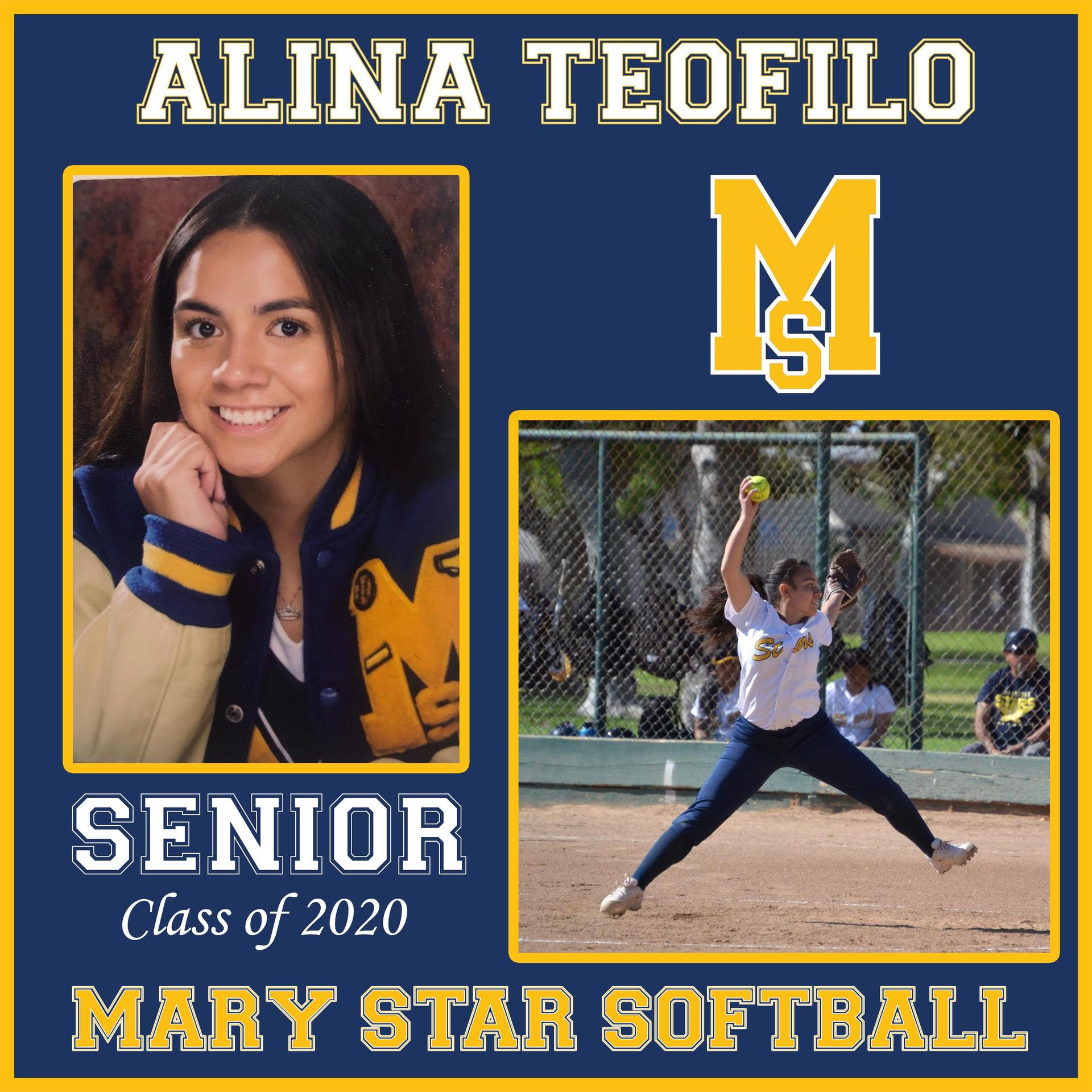 Sofia Amalfitano (#17) has played softball and catcher at Mary Star High School for 4 years, but has been playing since she was 6 years old. Sofia’s most cherished memory from playing at Mary Star was making it the CIF-Southern Section Division 6 championship game in 2018. Her advice to the younger players is to play every game like it’s your last, practice hard, and don’t forget to have fun.

In addition to being an all-league softball player, Sofia played varsity soccer for 4 years and was captain her senior year.  She was on Principals Honor Roll , National Honor Society, and California Scholarship Federation for the last 4 years.  She was also Junior class President, a member of the ASB Cabinet, Leader of the Gold Rush, and a Retreat/Confirmation leader for Holy Trinity Parish. Sofia was also crowned Mary Star Parish Fiesta Queen in 2018, has received the Christian Service Award the past 3 years, and has over 600 volunteer hours.

Sofia is attending Cal Poly San Luis Obispo in the Fall and majoring in Construction Management. She would like to thank her parents and family for their love and support shown her throughout her whole life. She would also like to thank her coaches for always having faith in her and always pushing her to be the best player she could be.

Erica Heredia #12, has played softball at Mary Star for 3 years. Erica’s positions include 1st base, left field, and center field.  Erica's  most cherished moment is when the  team makes funny tiki’s toks after the games. Erica's advice to younger players is to always have fun and to enjoy the games.

In addition to playing softball, Erica has been on the honor roll for all 4 years and has achieved principal's honor roll for 3 years . Erica has been on ASB for 2 years, in the marketing and publicity cabinet as well as the admin cabinet. Erica is a part of the Mu Alpha Theta club, the latin club, the Beta club, key club. Erica has also earned membership in the national honor society as well as the California scholarship federation.

Erica intends to attend ASU in a 4 year program in the fall to attain her BSN and  She hopes to eventually work as a labor and delivery nurse. She thanks her JV coaches and Varsity coaches as well as all of the team moms for all of their help and support over the years.

BarbaraAnn Klepl has played volleyball and softball at Mary Star for 4 years. BarbaraAnn's most cherished volleyball memory is all the times at tournaments and practices acting crazy with all her teammates, and being told "Barb and her coffee" by teammates and coaches. BarbaraAnn's most cherished softball memory is the bus rides, going out to eat with the team after wins together and almost getting kicked out of Denny's after a big game. Her advice to younger softball players is to always work hard and realize your hard work will pay off in the long run, and four years goes by fast so enjoy every practice, home game, away game and tournament you get to experience with your team.

While playing volleyball and softball, BarbaraAnn played as a middle on her volleyball team for 4 years, and played as outfield on her softball team. BarbaraAnn has been on the Honor Roll each semester while attending Mary Star and is member of Mu Alpha Theta, as the secretary. BarbaraAnn has also earned membership in the National Honor Society and California Scholarship Federation.

BarbaraAnn plans to attend a 4 year university majoring in kinesiology with a focus on sports medicine. She thanks her JV Coaches Jeff and Nick and Varsity Softball Coaches as well as her parents for all of their support.

Sarah Leyba #21 has played varsity softball at Mary Star for 4 years. Sarah’s most cherished softball memory is when they traveled to Palm Springs and defeated Rancho Christian 7-6 in round 3 of playoffs. Sarah’s advice to younger players is to enjoy each moment and do not take this sport for granted. Be there for each other, listen to one another’s problems, give good advice

Work hard, be determined, give God the glory.

In Addition to softball, Sarah earned blue and gold achievement 2 years and also was in the martial arts club for 2 years. And participated in the Federal Christian Athletics Club her first semester as a freshman

Sarah will attend El Camino in the fall of 2020. She plans to play softball and pursue her dream of playing softball at a 4-year university while studying fire science.

Skyler Marquez (#1) has played softball at Mary Star High for all 4 years. Skyler's most cherished softball memory was making it to the CIF championship game her sophomore year or hitting the ball out of the park her junior year against Pomona Catholic. Skyler's advice to younger players is to always keep your head up after making a mistake so you can do even better the next inning, never let yourself down during a game, have confidence and be a hard worker on the field.

Outside of softball Skyler has made Honor roll and Blue and Gold achievement in her 4 years. She has also been on varsity since her freshman year and was happy to be a part of the winning game against Rancho Mirage which led her to the CIF championship game.

Skyler plans to attend Cal State Dominguez Hills to continue her academics. She plans on Majoring in Criminal Justice and to hopefully be a detective to help at crime scenes. Skyler would like to thank all the coaches who have made her a better player and helped her gain confidence and strength over the years, and family and friends who have supported her through this journey .

Maria Rabe (#6) has played softball for three seasons during her time at Mary Star. Maria’s favorite memory during her time on the team was one time during practice, the outfielders were working on various drills and crow hopping and she didn’t know how to do them, so Sky was teaching her to do them while waiting for their turns. When it was Maria’s turn to get the ball and attempt a crow hop, she totally forgot everything Sky went over with her and jumped like a ballerina instead of a crow hop. Maria’s advice to younger players is to always give everything while playing out on the field and never give up.

In addition to playing softball, Maria has also been active in her school community. She has been on Principal’s Honor Roll since her freshman year. She also has gotten CSF (California Scholarship Federation) and been in the National Honor Society since sophomore year. Maria has also been part of various clubs such as: National Beta Club, Mu Alpha Theta, Squire Roses, Green Team, Latin Club, and Yearbook.

After graduating Mary Star, Maria will be attending California State University, Northridge. She is planning on majoring in biology. She aspires to be either a nurse or a biotechnologist to have a career in the medical field. Maria would like to thank her parents for allowing her to play softball and supporting her all the time on and off the field. She would also like to thank her teammates for also supporting her and for giving her great memories she’ll never forget of practices and games. Lastly, Maria would like to thank her coaches for teaching her how to play the sport and always encouraging her to give it her all while on the field.

Ashley Rico (#29) has played softball at Mary Star High School for all 4 years. Ashley’s most cherished softball memory was defeating Rancho Mirage in the semi-finals her sophomore year to head into the CIF Championship game. Ashley’s advice to the younger players is to have fun, work hard and give it your all everytime because you never know when your last game will be.

Outside of softball, Ashley earned Principal’s Honor Roll each semester all 4 years. She is a member of Mu Alpha Theta club and participates in ASB as Co-President. She has earned her memberships in National Honor Society, and the California Scholarship Federation. Ashley is a two time Camino Real League Champ, and a 3 time All League 1st team. She is also a 2 time all CIF Southern Section 1st team. She has been awarded with being MVP and the Most Outstanding Player of the year. Ashley received an athletic collegiate Division 1 scholarship to play softball at San Jose State University.

Ashley’s plans to attend San Jose State University to continue her academics and softball career. She plans on majoring in Management Information Systems and work for any tech company in the future. Ashley thanks all her coaches, teammates, friends and especially her parents for all their support during this journey.

Alessandra Samperio  (#15) has played varsity softball at Mary Star for 4 years. Alessandra’s most cherished softball memory was her sophomore year when the team beat Carnegie 5-2 in the semifinal game to move on to the championship game. That game Alessandra had 13 strikeouts and the team they beat was undefeated with a 27-0 record. To her, every inning was intense and the team as a whole pushed through and got the win. Alessandra’s advice to younger players is always have fun but to make sure you are working and playing your hardest at all times.

In addition to softball, Alessandra has earned Principal's Honor Roll 5 semesters and Honor Roll two semesters. Alessandra is a member of Mu Alpha Theta Club and has been in Yearbook all 4 years of high school. Her senior year she was also Co-Editor in Chief of the Yearbook. Alessandra also is a member of the California Scholarship Federation.

Alessandra will attend LMU in the fall of 2020. She plans to major in studio arts while playing softball at the D1 level. Finally, she thanks her coaches for the fun and memorable journey it has been, her parents for all the love, support, and time they have spent traveling to all her games, and most of all to her teammates for always being by her side and always putting a smile on her face.

Alina Teofilo (#4) has played softball at Mary Star for 4 years. Alina's most cherished memory is when she received defense player of the year her junior year.

In addition to softball, Alina has earned honor roll or blue and gold achievement each semester. Alina is a member of Mu Alpha Theta and National Beta Club. Alina has also earned a membership in the California Scholarship Federation. Alina has also been part of student council and ASB for 2 years. Alina was part of the cheer squad her 4 years at Mary Star. Alina is also a 2 time All American Nominee for the National Cheerleaders Association. Alina was also the boys basketball team manager and a student assistant for football. Along with having a part time job her junior and senior year she has also completed 547 volunteer hours.

Alina plans to attend the University of Oregon to study political science.