Michael Ibarra
Marine
Okinawa, Japan
After graduating from Mary Star, Michael Ibarra played football for two seasons at Los Angeles Harbor College. In the spring of 2010, Ibarra completed 13 weeks of training and graduated from the Marine Corps Recruit Training Depot in San Diego and Marine Combat Training at Camp Pendleton. In the summer of 2010, he trained at Camp Lejeune in North Carolina and graduated on September 2 before heading to Okinawa, Japan for a two-year tour of duty.

He is the son of Jesse Ibarra, a Fermin Lasuen alumnus. 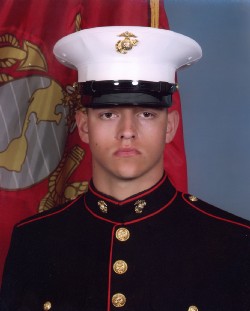