While at Mary Star of the Sea High School, Sarah Gascon was named an All-CIF first-team selection in three sports: basketball, volleyball and softball. She continued to excel as a multi-sport star at the Division 1 collegiate level. At Southeastern Louisiana University, she was honored as the 2002-03 Female Athlete of the Year for her performances in volleyball and softball. Sarah also played soccer during her last semester in college.
In 2004, Sarah was selected as a member of the first ever United States of America Women's National Baseball Team. She knocked in the game-winning run in the Gold Medal Game of the first Women's World Cup Championship.
In August 2010, she helped the United States capture the bronze medal at the International Baseball Federation Women's World Cup in Maracuay, Venezuela by hitting .314 in 12 games with five RBIs and eight runs scored.
In the fall of 2010, Sarah joined Mary Star's varsity volleyball coaching staff. 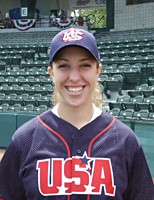