Jaime Maggio
Reporter/Sports Anchor
KCBS Channel 2 and KCAL Channel 9
Los Angeles, California
After graduating from Mary Star of the Sea High School, Jaime Maggio earned a communications degree at UC Santa Barbara which propelled her into a broadcast journalism career.
She gained experience throughout the country and returned to Los Angeles in the spring of 2010 as the co-anchor of "Sports Central" at KCBS Channel 2 and KCAL Channel 9.
In a recent Daily Breeze newspaper article, Maggio was praised for her hard work and credibility:
Maggio had a quick entry point convincing her new workmates what she was all about - she played it naturally.
"In every sports environment I've been at, you're in a man's world and you need to know what you're talking about or you won't fit in," said the Long Island native who long ago dropped her East Coast accent. "I've been a sports fan as long as I can remember."
Her resume already included eight years at L.A.-based Fox Sports Net as a talent coordinator, operations assistant and production manager. Her most recent experience as a Fox NFL sideline reporter and a Philadelphia 76ers courtside reporter at Comcast SportsNet expanded her talents.
In actively seeking a role anchoring a sports desk, however, Maggio wanted to take her game to the next level.
"I've had my eyes set on something like this for a long time, and it's finally an opportunity for me to see more about what I'm good at and how much more I can learn," said Maggio, who moved to Southern California when she was 14 and played softball at Mary Star High in San Pedro.
Quotes from fellow broadcasters:
Co-anchor Gary Miller said, "What I particularly admire is she has no catchphrases - she doesn't try to sound like a guy or a jock on highlights. It's just her energy and enthusiasm that's contagious."
John Ireland said, "She's very easy to root for and impossible not to like. As hard as she works, what's unique about her is that she is always trying to get better. Whenever I compliment her on a story she's done, she always comes back with: `Anything you didn't like?' Or: `Would you have done anything differently?' That's incredibly rare in this business, and especially in this market." 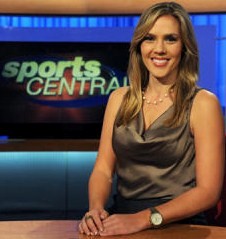