Ray Martin
Retired Bank Executive
Southern California
As a member of Mary Star of the Sea High School's first graduating class, Ray Martin was among the trailblazers. The school's first Student Body President, he joked that his looks didn't get him the job and it was a great experience. As far as Martin showcasing his leadership at the time, he humbly said, "When you're that old you don't even think about things like that.
"It was a small class and pretty tight knit. We had a good teaching staff, the facilities were brand new at the time and the school prepared kids for college. They did a great job."
Now retired after a successful banking career, Martin recently looked back fondly at Mary Star, the priests, sisters, teachers and coaching staff that helped mold him into a valuable executive in the community. "It was a great school," he said. "Monsignor Scott had a real vision for San Pedro and Fr. Kiefer ran the school and became a Monsignor later in life. The sisters did a great job and quite a few of my classmates went off to college."
As a football player, Martin said he learned to focus on hard work, teamwork and accountability from Coach Nick Trani. "We all had a lot of respect for him," Martin said. "He was a real positive influence on a lot of young men."
Martin also recalled the great athletic banquets that were held in the 1950s. Jim Thorpe, Joe DiMaggio and Duke Snider were among the hundreds in attendance at Mary Star's 8th Street auditorium.
By attending class reunions, Martin has kept in touch with his classmates and even worked alongside some fellow Stars at Coast Savings, including his classmate, Barbara (Aresco) Mancusi. "Barbara did a terrific job running the San Pedro facility. She was an outstanding Branch Manager," he said. "Quite a few Mary Star kids worked there including my four."
Martin served in the Air Force for four years, started his career at San Pedro's Fisherman's & Merchants Bank and became a bank teller at Coast Savings and Loan Association in 1959. Martin's determination and dedication paid off as he moved up the ladder steadily to become president in 1980, chief executive officer in 1984 and chairman of the board in 1987.
"The bank at that time had about $13 billion," Martin said. "We had over 100 branches, but what was amazing was the fact that savings accounts and balances in San Pedro hovered around $245 million which was more than every major city."
Information from several financial publications recognized that his leadership skills were displayed in the late 1980s and early 1990s. In September 1990, Coast Federal Bank was severely undercapitalized. A chaotic real estate market and new federal capital rules nearly forced a takeover. With $12 billion in assets at the time, Coast's stock plummeted to $1.625 a share from about $12.125 a share earlier in the year.
Coast recorded profits for 10 consecutive quarters and three years later its stock was trading on July 12 for $14.625 a share.
Among a number of California financial institutions which made its way back from near seizure to financial strength, Coast's is considered by many experts to be the fastest, first and best turnaround. Joe Jolson, analyst with Montgomery Securities in San Francisco, said the Coast story "is probably the most dramatic turnaround story in the history of banking."
"The job of the CEO is to anticipate change and position his company in light of that," Jolson said. "Ray positioned his company before the others did and he deserves credit."
James Montgomery, chairman and chief executive officer of Chatsworth-based Great Western Financial Corp was impressed with what was done in a relatively weak real estate market. "I have to give Ray and his team an awful lot of credit," Montgomery said. "I'm happy it happened to Ray because he's a first-class guy."
Montgomery, who has known Martin for years, said he likes him because "he's not a grandstander," but rather a "thoughtful" and "sincere" individual who likes to give credit to the people around him. An example of how he deflects praise, Martin said he is very proud of all the members of his management team and of the fact that none of his young, smart managers left Coast when the going got tough.
When asked to explain his success, Martin said he "hit an industry in a growth mode. ... You get into a growing industry and you have a lot of mentors and a lot of opportunities to advance."
Diana Martin says her husband has "incredible drive" and is now able to enjoy the quiet things in life since he retired in 1998. 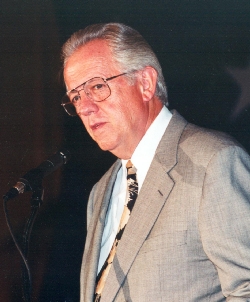